A downloadable game for Windows

A downloadable game for Windows.

In Dungeons of Everchange you take a role of a lonely hero, who tries to descend into unknown depths of twisted mazes of Everchange to kill ultimate tyrant Belphegore. There is no written documentation or maps of survivors who dared to enter the mazes and escaped alive, at least no rumors match what you can found down there. Except one: mazes are always different, walls and corridors change, and utmost horrors of every size and shape lurk in dark, waiting for its next prey.

A few more words on game

DoE is a turn based game, with procedurally generated ASCII levels and permadeath implemented. Turn based part is freely switchable to real-time play, and a dungeon start to live life on its own. Combat is purely turn based.

I really hope this isn't dead

can someone tell me the specs?

can you fix  the missing .dll problem

Hi. Sorry for late reply. I just somehow don't get emails that someone replied. If you are missing msvcp140.dll or vcruntime140.dll you have section in readme.txt about that:

If the game doesn't want to start and you see error stating that msvcp140.dll or vcruntime140.dll are missing, you need Microsoft Redistributable Package. Head over to https://visualstudio.microsoft.com/downloads/ and under Other Tools and Frameworks you will find Microsoft Visual C++ Redistributable for Visual Studio 2019. Download and install x86 version.

may I ask how do you make a "cyclic dungeon"? because I'm doing research on that

Sure, I have based my generation on this read:

Ah sorry about that. It seems that old Actions menu has not be removed in 9.7.5.

Don't use it. There is new Actions menu that can be invoked by pressing '

The game looks and seems really nice and fun, but the controls are a bit confusing and aggravating. You can't use the numpad for everything, which means I have to switch to the arrow keys when handling inventory.. The ? menu is misleading, things such a D to lay down, which is achieved by using the stand up key.. D doesn't do anything.. Also, the @ key doesn't show any sort of "Character screen"..

EDIT: I just removed a cursed tower shield in my hand by equipping my battlemace..

Thank you for your feedback.

This type of inventory is  brand new feature, just implemented. This is one of the "minor" issues that were overlooked..  Help screen is also missing remaps I have introduced not so long ago. Thanks for pointing it up. Same for character screen, it is remapped to '#' (and has some rendering problem also, as I saw), but it will be put back to '@' in next minor release.

Removing Cursed shield is a bug unfortunately. Need to look deeper into it.

I hope I can fix these really fast, and release one fix to this release.

I do want to say though, the game looks and plays beautifully, your UI is incredibly nice and impressive. I'm very interested in diving into your game when some things get patched up. Cause it looks excellent really.

Is there a way to quit a game and go back to main menu? I couldn't find any key for that?

(There could be a suicide key. :p)

Ctrl+X goes back to main menu, Ctrl+Q quits the game.

1) arrows kill enemies, not bows.  Bows require killing enemies to ID them (besides the more esoteric methods of IDing things).  Arrows require a number of turns to ID, presumably because the game thinks that you kill with bows, which you don't.  Or in any case the number of kills needed with a bow never goes down.

3) You can't use the highlighted letters on the title screen; you have to use directional keys and then press a confirmation key.

4) Sacral magic is really weird.  This might not be a bug, but if used properly it is vastly more powerful than most other skills.  You can buff a single weapon any number of times provided that the Sacral Weapon skill is a different level, which means you can have Sacral Weapon, Sacral Weapon II, and Sacral Weapon III (for example) all active on the same weapon at the same time indefinitely if you want.  That's a *lot* of extra good stuff ness (not sure what exactly the skill does but I'm pretty sure it makes your damage insane and the extra damage bypasses piercing damage resistance.  This is particularly weird because Sacral is one of the few skills you can train.  Just hold down the 'Sacral Weapon' key and you'll quickly find both that action and the Sacral skill levelling up like crazy.  It does cost a lot of food and water, though, so that's why I'm not sure this is a bug.

5) Sometimes the game just crashes.  Mostly happens when I'm attacking, mostly with ranged weapons.  Is pretty rare and crashes don't generate a morgue file so I don't have enough information to really guess at what's probably going on here.

6) Arrow stacks split if some of them are in a target while the rest are identified.  Lets say you have 10 unidentified +1 arrows you are using to fight a goblin. You shoot 3 into the goblin and he dies.  Your arrows are IDed.  You pick up the arrows you shot off the corpse and they are still not IDed.  A couple turns later they are IDed as well, but they still can't stack with the previous ones they were a part of.  You forever now have two stacks of +1 arrows from the same depth.  Sometimes they are also assigned to the same key, because they are the same item, but one of them at random will always be the one the game selects first by that keybinding.

7) When you move by clicking the pathfinding is pretty good, but rarely it will move you into a chest.  If it does, it's Game Over cause you ain't ever getting out of that menu screen.  Worse still, you can't actually die since you can't exit the menu screen for more than an instant and no time passes when they automatic movement reopens the chest, so the game is softlocked and you have to close it.  Worse still, you can't close it normally because the game is programmed not to allow the 'X' button on the window to be pressed nor to accept program termination commands in most of the normal ways.  You must instead open task manager and end the process (on windows).

8) You can enter stairs even if you can't enter the space they are on, which is pretty cool.  Sometimes when a part of the stair's walls are chosen to be secret doors or they spawn diagonally included in another room you can use this to explore the dungeon much more efficiently, preventing you from having to backtrack all the way to the stairs so long as you can hop diagonally in through a crack in a wall.

9) You can 'd'rop cursed items like they're no big deal, even though you can't un'e'quip them or equip other items over them.  Considering I'm not sure how else you'd ever get rid of them unless they are a melee weapon (slimes) or ammo (shoot it or slimes), this might not be the worst thing ever.

11) some firing angles let you shoot columns or a wall instead of your target, letting you train up your ranged weapon skill many points for all those misses until your target wakes up and moves.  Sometimes you can empty your whole 40+ arrow starting quiver that way before that happens, though it's pretty rare to get that lucky,  Just make sure you can get to the arrow pile afterwards before you actually have to fight something.

12 a) Books of Slide Away (and upgraded versions) don't do anything if you already know Slide Away.

Do you have a better place to send bugs?  I don't wanna bother you with too much information ^^;;

I knew some of them, while others are new to me.

You can always send bug reports at: support@darkgnosis.com

I die a lot by walking down (or occasionally up) stairs and being instagibbed by walls.  Is there just a set chance of dying each time you first use a staircase or is there some way to reduce/avoid this?  It doesn't seem to count as a trap and the reaction jump out of the way ability you get on ranged characters doesn't work against it.

Unfortunately, it's a bug,. Fix is already done, just need some testing to be sure that everything is fine. New version will be published in a few hours when I'm sure that the bug is fixed.

Thank you for reporting!

everytime I launch the game it opens a small window then quickly closes it down, do you have any ideas on how to fix this?

Hi. Sorry for the late reply.

On which OS you are trying to start the game?

Hello, would you do a Linux version too ?

Hi. Yeah, eventually at some point in future.

is the future near? :D

Not yet. :) First I need to finish the windows version completely, or at least go near Beta. 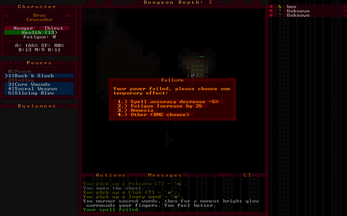 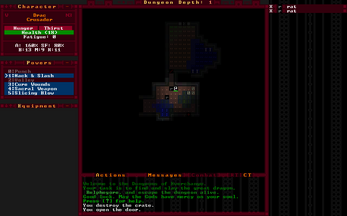 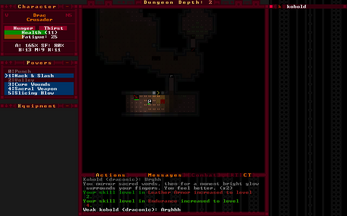 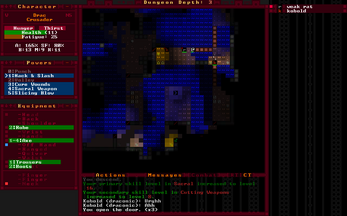 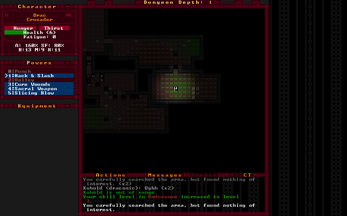 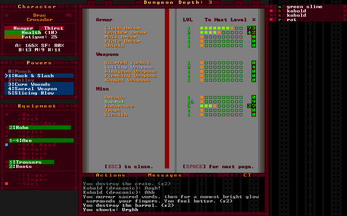